After gaining a scholarship in Ancient and Modern History from Balliol College, Oxford, he set up his own business on leaving university. More recently he has pursued a successful career in business, advising the Chief Executives and Finance Directors of some of the country's leading industrial companies on their communications with the press and the financial community.

He has campaigned in three elections already, working for Worcester man and then Secretary of State for Health, Stephen Dorrell in 1997, for Richard Adams, the Conservative Candidate for Worcester in 2001 and as press officer for Oliver Letwin, then Shadow Chancellor, in 2005.

Robin lives in the centre of Worcester, in a flat on Sansome Walk and is a regular supporter of both the Worcester Warriors and the Worcestershire County Cricket Club.

When he was selected as prospective MP for Worcester, Robin said "you have made me the happiest man in Worcester, this is the greatest privilege and the greatest responsibility that I can imagine. To have this chance to fight and win for a city I love has already realised one of my lifetime ambitions."

Robin has based his campaign on local services, saying, "For years Labour hasn't been listening to what people in this city want, they are failing to deliver on health, on education, on law and order and on housing and they are losing touch with the country."

"Worcester needs a fairer deal on education funding and an end to unnecessary cuts in our local services, we want to have our own post offices, fire and ambulance control centres and we need to stop Labour's regionalising agenda. We want to have our own say on plans for new homes and not simply to have swathes of new building imposed upon us."

"I will campaign to get Worcester a better deal, to defend local services and to make sure that more people in this city get a chance to own their own home, have access to the best education for their children, good healthcare and safe streets. I will always put the interests of Worcester first."

Robin became the Conservative Member of Parliament for Worcester in May 2010.

Worcester’s MP, Robin Walker, who has campaigned over many years for the full dualling of Worcester’s Southern Link including the Carrington Bridge, has welcomed good news from the Department of Transport (DOT) that they will be providing £500,000 to help fund the development of a business case f

Worcester’s MP, Robin Walker, has welcomed another strong set of job figures for the city with unemployment figures down from last month and back below 1,000. The total figure for unemployment was 995, down from 1,015 in May. These were the last set of figures before the EU referendum. 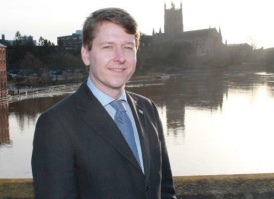